As of Build v0.371, released during April Fools, Flubber, a joke item, was actually introduced into the game, as well as the ascended version of Looty McLootFace, Sir LootyMcLootington III, Esquire.

Flubber drops in the Tutorial Zone, and the drop chance is based off CURRENT run's highest defeated boss, starting at 0.82% at boss 59, and increasing by 0.41% every boss after, up to 100% at boss 300. There are no other requirements (such as Cooking stat or wearing Ascended Pendants, as in the meme). Flubber initially has no stats, similarly to Forest Pendant, but drops at Level 10, requiring up to 10 Flubbers to ascend and get stats.

Triple Flubber is the ascended version of Flubber, and has the following stats:

As of build v0.375, where a new Adventure zone and titan were introduced, a new secret item was also introduced, which is required for defeating UUG, THE UNMENTIONABLE, the fourth titan.

The ring initially only drops after defeating boss 100, then can be looted by defeating the Goblin enemy (Droop), back in the Forest zone, with a base chance of 0.8% (99.2% chance for the ring to crumble into dust). The ring drops at level 1 so it can be affected by Gaudy's set bonus. Once the item is discovered in the item list, the boss 100 requirements are removed.

The ring is no longer required in the player's inventory once maxxed to autokill UUG, but still needs to be equipped to fight it manually. 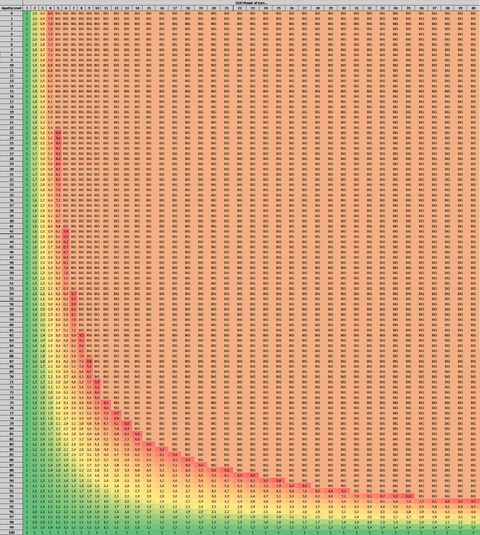 The Best Loot Drop of All[]

When you defeat UUG, there is a slight chance (2% base chance) of getting The Best Loot Drop of All, which is just a Level 0 Forest Pendant.

THE BEAST, the 6th Titan, introduced in build .401, requires a riddle to be defeated.

The riddle starts once you go to THE BEAST zone after unlocking it, and defeat the Skeleton Guardian.

Greasy Nerd is the 7th titan, added in build .410. To unlock him, you must first beat boss 125 (In Evil Mode) and defeat Greasy Nerd's Mom, similar to how you unlocked The Beast. She's a straight-forward fight with no special moves to watch out for. Once she is defeated, you must enter a five-letter code to access Nerd himself.

In the story for each boss, you will notice a seemingly random letter at the end of the story text and in the art. To unlock him, you must rebirth and input parts of the code at five specific story bosses, pressing the corresponding letter on your keyboard to input one of the letters of the code when they're the active boss encounter:

Make sure you turn off auto-nuke before doing this, and DO NOT nuke past the bosses, or you will have to rebirth again, as you can only input the letter if they're the active boss - the bestiary does not count. Once all five letters have been entered in sequence, the Greasy Nerd can be encountered.

The Godmother, is the 8th titan, introduced in build .413. To unlock her, the player must first defeat The Consigliere, who takes the Godmother's place until you complete the requirements. Once defeated, he will drop The Death Note, which instructs you to defeat certain enemies in adventure. These enemies can be defeated in any order. No need to rebirth, just kill them in their adventure zone. They are:

Once all enemies have been defeated, you must return to the Consigliere after the Godmother's respawn is finished, and defeat him again. You are now free to fight the Godmother.

The Exile is the ninth titan added to the game in build .422. As per usual, it requires you to solve a puzzle and complete a few steps before he can be fought.

Congratulations, the Exile is now unlocked and should spawn as normal. Please keep the unlock items as they are needed for the secret drop.

To unlock the secret drop:

IT HUNGERS is the tenth titan added to the game in build 1.000. Though it can be fought immediately after unlocking, no damage can be dealt to it until after you solve a puzzle and complete certain steps.

NOTE: YOU WILL NEED ONE GLOP FOR EACH ATTEMPT AT THE TITAN
NOTE 2: GLOP IS NOT NEEDED TO AUTOKILL THE TITAN

Toggling the Lazy ITOPOD Shifter has a 1% chance to change its text to say Shitter instead of Shifter!

Opening the Item Daycare has a 1% chance to change its text to "Item Rave Woooo", partially covered by the back button.

Hovering over the NGU Cap Modifier in Sellout Shop used to have a chance to display a special tooltip referencing Rick and Morty, but it was removed when someone who didn't recognize the quote felt it was sexual harassment.(Screenshot)

The description for Wish #99 (Resource 3 Cap VI) contains a bit of 4G rambling to himself.

A message may appear in the adventure chat saying, "You raised your Power and Toughness by some number. Woo. This message was programmed to come up rarely, and also to be boring."

There was a setting in the Settings menu that allowed the player to activate a beard at max slots while deactivating the oldest beard. However, if it deactivated the Golden Beard, it would drop gross GPS without turning off diggers, potentially reducing net GPS below 0. In build 1.130, the setting was removed and replaced by a "positive affirmation".

Community content is available under CC-BY-SA unless otherwise noted.
Advertisement